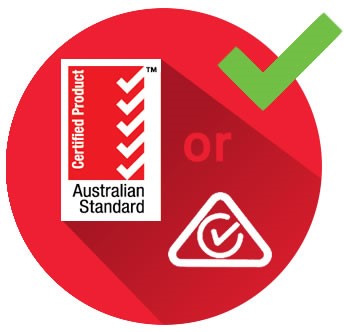 It’s now 11 years since smoke alarms in homes became the law in NSW. And most smoke alarms have a life span of only 10 years. Up to 60% of homes in NSW could have expired smoke alarms in place and they don’t even know it. This is a worrying statistic as so many tragic ends to house fires can be avoided simply by having a functioning smoke alarm to alert a home’s inhabitants to the first signs of smouldering smoke before a catastrophe happens.

What is the law in NSW? It is NSW legislation that at least one working smoke alarm is present for each level of the home. Ideally, one should also be present in each bedroom where people sleep.

What type of smoke alarm should I replace my old one with? Firstly, make sure the smoke alarm you use is approved my Australian Safety Standards with this sticker.

We always use hardwired photo electric smoke alarms as they are ‘set and forget’ never needing a battery change as they contain a rechargeable battery. Photo electric smoke detectors see the fire rather than smell the smoke, making them much quicker at raising the alarm in the event of a fire. They detect the most common type of fire, smouldering fires, which ionisation smoke alarms neglect to do. With increasing open plan design homes, photo electric alarms are the smoke alarm of choice, as they are less prone to false alarms from such things as cooking and burning toast.

Are you based in Hornsby, the North Shore, Castle Hill or surrounds? to replace your smoke alarm please call us today. We have the best smoke alarms in stock as your family’s safety is our priority.